That’s how much time the average user spent on Facebook in January. That makes Facebook the most-used site on the web, well ahead of No. 2 Yahoo (2 hours) and No. 3 Google (1.23 hours), according to new research by Nielsen.

That same month, Facebook raced ahead of Yahoo to become the place where the largest share of time — 11.6 percent — is spent on the web. No. 2 is Yahoo at 4.25 percent and Google is No. 3 at 4.1 percent, according a Feb. 18 report by Compete.com.

That’s a lot of numbers and I promise to not load you down with more. But these numbers point to a lot of questions businesses should be able to answer. Here’s the big one:

Where are your customers?

One business making good use of Facebook to connect with customers is Lazer Kraze, 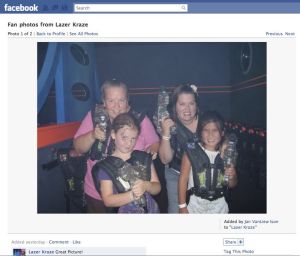 with two locations near Cincinnati in Mason, Ohio and Erlanger, Ky. With a fan page on Facebook, Lazer Kraze communicates directly and quickly with more than 1,100 customers. Visitors’ scores are posted from the previous night. Upcoming events and specials are announced.

Importantly, CEO Robin Wilcox is learning how to add time interacting with customers on Facebook to the other ways she listens to them and markets her business.

Here’s what else Robin says about the Facebook fan page she launched in December for her business:

It’s the right demographics — all ages that are still open to new ideas, somewhat tech-savvy, and we’re a social business. The more the merrier and it’s easy for people to make plans based on what they see.

You also have a web site. What other social media tools do you use?

Linkedin but not as avidly.

Who contributes to your web and Facebook updates? Who participates and how were they selected?

My husband and I (business owners) run the web site and Facebook. Our managers are also admins so they can help post top scores and updates.

Little is asked but customers (kids and college-age mostly) like to boast on their scores and we post special pricing and hours that get comments, some from parents also.

Do you moderate comments from fans, followers and readers? How do you respond to customer comments and concerns shared on the social media sites?

Yes, we check it at least daily for comments and luckily no concerns have been shared and only very positive comments. Sometimes we respond and sometimes not.

What have you learned about your customers on social media and how have you changed or responded online or in the stores as a result?

Nothing unexpected has been seen yet. We’re still really new at this though.

You’ve attracted more than 1,100 Facebook fans in a short period but I imagine this is a small number compared to the total number of Lazer Kraze customers. How much time do you devote to social networking and how to do you measure and assess its value compared to other networking and marketing efforts?

All marketing efforts are assessed by what appears to be a response. This is awesome being a quick, direct response! It’s really easy time-wise as it’s just quick while I’m at the computer so much anyway to pop over a couple times a day and check it or post something. 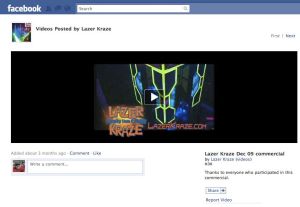 We still have considerably more phone calls and e-mails and certainly more hits to our web site.

How do you let customers know where to find Lazer Kraze on social media sites?

From what you’ve learned about social media so far, what suggestions do you have for other businesses?

I think it really depends on what business you’re in. We’re the perfect business for it with young customers who spend a lot of time on Facebook. I still think if you have a construction business or other business strictly aimed toward adults, you’re probably better off to spend time on Linkedin.

Practicing what I preach: Become a fan of Celek Media Consulting on Facebook

This entry was posted on Thursday, February 18th, 2010 at 3:51 pm and is filed under Social Media. You can follow any responses to this entry through the RSS 2.0 feed. Both comments and pings are currently closed.

One Response to Help your customers become fans on Facebook