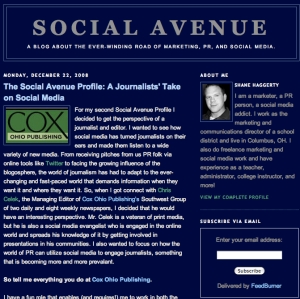 You never know where the next great ideas will be found. Often, they’re not where you expect, which is why it’s exciting for me to run into people like Shane Haggerty online.

Shane’s the PR director for a vocational high school and adult career education center in central Ohio. Not the first place many of  us might look for best practices for social media. But look more closely and you’ll find a leader who’s put Twitter, You Tube and Facebook, among others, to work on behalf of his school community. Just as important, he gives alot of his time to helping other school public relations directors, the Ohio Department of Education and community groups learn about social media, too.

What I like about Shane’s approach is that he’s made using social media a seamless part of his work, another way to communicate with students, parents and the community served by his school. We can all learn from watching how he does it.

So when Shane said in a direct message on Twitter that he’d like to interview me for his blog, I was honored and worried all at the same time. This guy is good at what he does; what, oh what can I share that’s new or helpful to him?

You be the judge.

Shane: I noticed from your Linkedin profile that you have spent many years in print journalism. Do you feel that social media and Web 2.0 and the online world has helped your profession more or hurt it in that it has taken away the “art” of print media?

Chris: Yes, I’m one of the print dinosaurs. Thanks for bringing that up!

This week between holiday gatherings with family, my college kids are home. There is a mad scramble to get to Newsweek and the features section of the daily newspaper, which they devour.

But parents also exist to provide broadband access. So my teenager keeps up with his friends wirelessly with an iPod Touch. My 21-year-old uses her laptop to email and update Facebook. They both read constantly from a range of web sites that feed their needs for info about music, cars, sports and Broadway.

Photos taken and stored on my son’s cell phone are downloaded into a digital “frame” that will become a Christmas gift for one of his college friends.

And my wife is on the other couch, sharing info from a texted school newsletter while setting up an alert to try one last-minute time to locate a Wii Fit for my nephew.

My lessons from the family room are these:

• There are plenty of consumers who want information. People still read — a lot — but narrative story forms delivered on dead trees once a day or once a week are not enough.

• They consume information when and how they want it.

• If we (traditional media) don’t provide it, someone else will.

More from this Q&A, and plenty of tips from Shane Haggerty.

This entry was posted on Saturday, March 21st, 2009 at 10:30 am and is filed under Schools, Social Media, Twitter. You can follow any responses to this entry through the RSS 2.0 feed. Both comments and pings are currently closed.